Healing PMDD naturally was one of the biggest challenges of my life as I fought to stay sane while losing my mind.

Back in 2007, at the age of 32, I made the decision to terminate a pregnancy, a decision which would change my life forever.

You see, truth be told, deep down I really wanted to have the child, however, I was so afraid of Motherhood, of making the decision to become a Mother, as my greatest fear would be to abandon my child, just like my own biological mother did with me.

So instead of listening deeply I made that unconscious decision based on my unconscious patterns, beliefs and behaviours around Motherhood and allowed the fear to trigger me into automatic reaction mode and terminate. I was afraid of saying YES and all because of pre-programmed conditioning that came from wounding and trauma.

Shortly after I developed PMDD – Premenstrual Dysphoric Disorder – a severe form of PMT that affects you on every level – physically, mentally, emotionally and sexually.

I felt like I was losing my mind. The depression was deep, the physical pain of my periods intensified, my breasts were constantly swollen and painful, the headaches never-ending.

Then there were the suicidal thoughts, I wanted it all to be over, I felt dying was better than living. I was a mess! Emotionally fucked up, constantly borderline hysterical all the time, swinging between sanity and insanity at the drop of a hat. What I was experiencing was real, and it was downright scary.

I was living in Italy at the time, and after the diagnosis, the only solutions they offered me was either the contraceptive pill or HRT. However, something deep inside of me kicked in and said no to both as I’d always had a strong aversion to hormone changing drugs hence the reason I got pregnant in the first place.

In moments of lucidity and calm amidst the chaos, I did some research and came across the National Association for Premenstrual Syndrome in the UK, and they provided access to a download for their Menstrual Diary. Somehow my fighting spirit became ignited and every single day, I filled out this diary, and my own journal, documenting every single aspect of how I felt on every level.

I started to listen to my body and my emotions and the diary gave me a structure to work within, helping me to understand myself on a deeper level, connecting with a sense of trust that a somehow I had the power to heal myself.

After a month or so, I started to introduce Evening Primrose and Starflower supplements into my diet, and gradually over the next six months the physical symptoms started to ease, my period started to flow again as normal, and I regained my natural 28-day cycle.

The deep depression and suicidal thoughts also started to gradually lift, which helped me to begin to work with my emotions and reactions to the termination in a whole new way.

PMDD was the result of the trauma I experienced through the termination. My body physically reacted and was sending signals of the emotional imbalance that were caused, not only the repressed emotions from the termination but also from the deeper unconscious patterns created from the wounding and trauma of my abandonment as a child, and the internal belief system I had unconsciously created around Motherhood.

The body is always communicating with us and if we are not listening to the deeper messages then we will keep manifesting illness, malaise and dis-ease. We might physically heal on one level but if the emotional roots have not been tended to the physical symptoms will simply manifest in another place.

As women, we have so many repressed emotions caused by wounding, trauma and conditioning we have been exposed to, especially regarding our femininity, our sexuality, and our emotional state of being that it’s no wonder they manifest physically in our reproductive system.

We suffer in silence, we ignore the signals, we are medically treated the masculine way of prescribe and suppress through medication, and we lose so much of our sense of self in the process.

Yet body consciousness and emotional intelligence are our birthrights, they are the foundation blocks of our ability to listen deeply and intuitively, and then act accordingly, trusting in what our body is telling us.

Every day, I am truly grateful for manifesting PMDD, for it has enriched my life in so many deep and powerful ways, and in doing so has enriched the lives of many other women who I have had the honour of supporting on their own journey back home to self, back home to the body, to reveal, heal and integrate all that is hidden in their unconscious, through the 1:1 Shadow Walking Process and the Maiden Mother Crone Online Workshop.

➤ WORK WITH ME – Let Go of the Ghosts From Your Past with the 1:1 Shadow Work for Women Programmes

How Keeping Secrets Keep Us Trapped

What Mask Are You Wearing and Why? 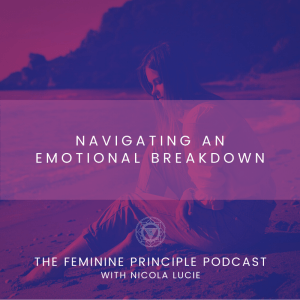